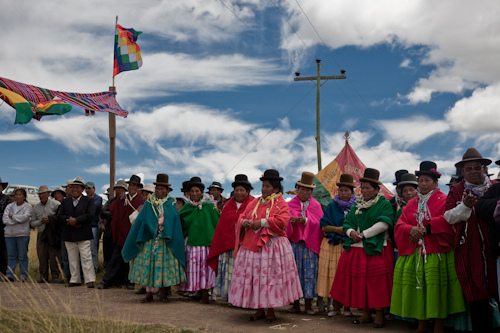 From the pre-sessional meeting of the United Nations Permanent Forum on Indigenous Issues in Bolivia, March 2010. The Permanent Forum is welcomed by the residents of Cota Cota Baja by the shores of Lake Titicaca. Photo: Broddi Sigurdarson, (c) 2010 UNPFII. Photo used with permission from UNPFII.

Despite the vast differences between Indigenous populations across the globe, many Indigenous peoples experience similar struggles. These include access to their traditional lands and recognition of their rights, including the right to practice their cultures, to speak their languages, and to engage in traditional economies and political systems, among other rights. We do not aim to profile these specific groups from across the globe but instead attempt to present some ways in which some of these groups have united across political borders and geographic locations, in the face of political opposition and countless other barriers, in order to engage with the international community and have their rights recognized.